When I was a young student I wrote my dissertation on Anselm Kiefer and John Heartfield.  It was about art and media pre-World War II and post World War II.  Kiefer's work was the aftermath, the devastation both on Germany and the mental and physical impact on the people of Germany. 'As Kiefer has said in reference to this national legacy of World War II, “[A]fter the ‘misfortune,’ as we all name it so euphemistically now, people thought that in 1945 we were starting all over again. . . . . It’s nonsense. The past was put under taboo, and to dig it up again generates resistance and disgust.”' (Aklteveer, 2008).  I poured over books of his work, looked at obscure journals and watched many documentaries and films of the man and his work.  I had not actually seen any of this is real life.  After I had completed, years later there was an exhibition as the The Royal Academy where they were showing a large collection.  Kiefer's work is massive, huge the sheer size is overwhelming and also beautiful, awe-inspiring. 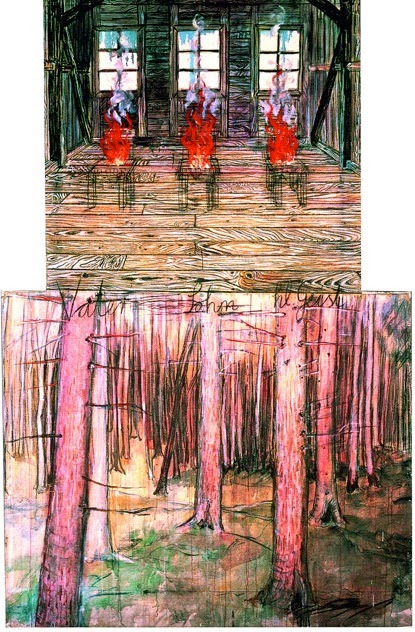 Anselm Kiefer (1973) Father, Son & Holy Ghost
This image is the image that I stood in front of and tears came to my eyes.  This image of the three empty chairs had always moved me in the books that I had but seeing it in overwhelming form where every brush stroke could be felt filled me with a complete sense of the work I could really feel it inside me.  The spiritual sense of the work also moved me as I thought of mass and how this connected to the image.  I attended a Anglo-Catholic Church just prior to getting married and was married in the same church in a very traditional Catholic Mass.  I always felt there that perhaps God could hear me and within the beautiful mass and the music from the choir I could feel a sense of peace.  In an essay it is written by Brooks Riley that Kiefer's;  'Quanternity--"depicting three small fires burning on the floor of a wooden attic and a snake writhing toward them, vestiges of the artist’s Catholic upbringing in the form of the Father, the Son, the Holy Ghost and the Devil. Metaphor meets reality in the sacred attics of stored mythologies."' (Anselm Kiefer: Fire in the Attic, 2019). The work that Kiefer produces uses many materials and this textural quality does make you want to touch and feel these works on your flesh. Kiefer is; 'widely hailed for his remarkable sense of materiality, Kiefer uses a variety of media to create works ranging from delicate watercolors to enormous multipart paintings to monumental sculptural installations composed of lead and steel.' (Major Survey Of Anselm Kiefer's Works At SFMOMA, 2006).  It is interesting that Kiefer's earliest surviving work is 'The Heavens (1969), a small collage book containing pictures of clouds and sky cut from magazines and affixed to white pages labeled with text. The artist’s use of fragmentary, rather than whole, images evokes the notion that heaven cannot be distilled into a single image or place but is better symbolized by fleeting impressions, a theme consistent in much of his art.' (Major Survey Of Anselm Kiefer's Works At SFMOMA, 2006)  The image above uses his studio space and fire, the other work that gives me almost the same sense of deep feeling is Fire in the Attic, the vast empty space with wood and fire bring to mind my own dreams of fire and rooms they inhabit. The image below shows the scale of the work and how as a viewer you are within the work, becoming part of it which is part of the reason this moved me as with the church is it feeling as if you are safe with God. 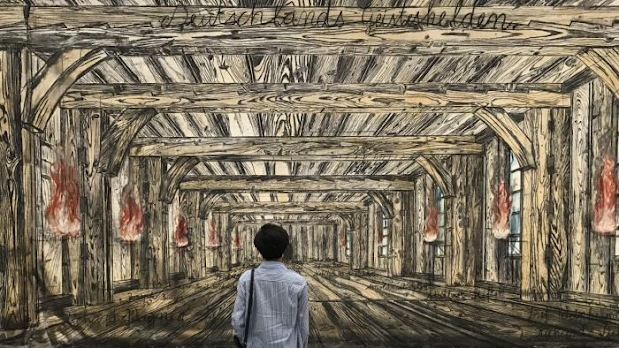 I really would like to create a new collection of images as I was experiencing by using old images.  My concept for the new collection would explore darkness and light so I will create images reflecting my chosen name Persephone.  Using photography I will try to create a set of 6-10 images that have a high contrast of light and dark.  These will be shot in black and white using my Olympus OMD-10 Mark II. I am not sure which lens I will use yet as I have a wide 18-40mm, a telephoto 40-150mm and a fixed 35mm lens and I will need to experiment to decide what kind of images I am after.  The 35mm would be great to shoot close up intimate images, the telephoto I really want to experiment with when I visit Seville to see what I can shoot in terms of urban landscape as I staying in the middle of the city.

After I have shot these I will curate these images and choose the most consistent set for a collection to add to my Rarible site to sell as NFT's. 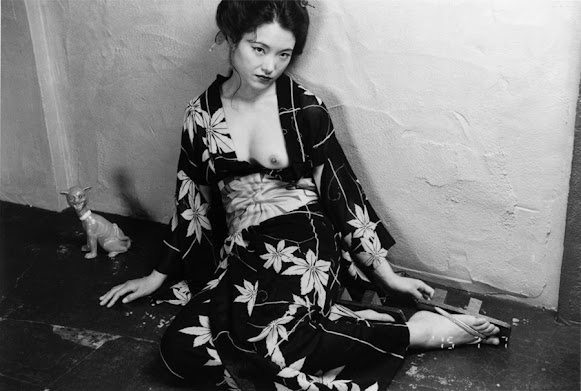 Nobuyoshi Araki, Untitled (Eros Diary), 2015Courtesy of the artist and Anton Kern Gallery, New York. © Nobuyoshi Araki
The shot above has the kind of contrast I am looking for with the white background offsetting the woman's dark kimono and then the white flesh of her breast accentuating the sensuality of the feminine form.  The hands are perfectly placed either side drawing attention to the cat on one side and touching her shoes pulling the viewers eye to the foot a sensual fetishistic object of desire.

Over the next two and half weeks I will spend time creating this project.  I Ill start with a practice shoot just to experiment with the kind of shots I would like to take.  This will probably take around 2 hours.  Once I have more of a plan for the shots for the collection I will spend may 3-4 hours taking shots.

After I completed all the shots I will create contact sheets and curate the collection I expect that this may take another 2-3 hours. I will then put each shot through Photoshop as quality control and make each shot is perfectly balanced and consistent for the final collection. I expect this to take at least 2 hours.

The final step will be minting all the images through Metamask and adding to Rarible I expect as I am still new to this, at least 3 hours.

I will add blog posts for the process and I will add further research which I would expect will also take another 2 hours.

The total length of this project will be 18 hours and I do think that this is possible in the time given and should be completed to upload to my website by the beginning of June.

Looking at the Yougov survey it states that 1 in 5 Britons describe themselves as an avid reader also 'Of the genders, women are also much more likely to be frequent readers than their male counterparts. Over a quarter (27%) of women read daily, compared to a sixth (13%) of men' (What are common reading habits? | YouGov, 2022).  Interesting physical books are still favoured by readers with 60% of Britons favouring physicals books and only 24% preferring an e-book.

Also I have discover that millennials which I have used for my customer profile are the highest users of audiobooks; 'Brits aged between 25 and 39 are the most likely to be fans of the audio book, with 13% saying they use audio books to get their fix – twice the number of other age groups' (What are common reading habits? | YouGov, 2022).

In terms of my choices here for my customer profile as stated women read more than men, millennials still like to read physical books and 42% of women prefer fiction which is another reason this is my ideal user. 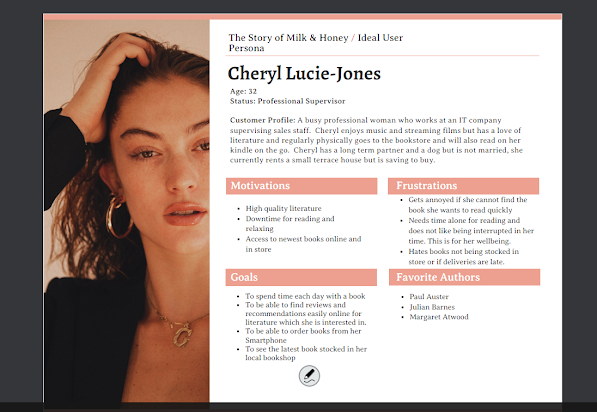 Considering the facts here I might consider creating an audio book as this seems to a good seller to this market and also I would market this more heavily as a physical book that you can easily buy online or  in-store as this is what this generation wants and are more likely to spend their money and time on.
Ideal Customer Profile- The Story of Milk & Honey
References
Martin, M., 2021. 21 Book Publishing Statistics and Market Insights in 2021. [online] TheCircularBoard. Available at: https://thecircularboard.com/book-publishing-statistics/ [Accessed 9 May 2022].
Yougov.co.uk. 2022. What are common reading habits? | YouGov. [online] Available at: https://yougov.co.uk/topics/entertainment/articles-reports/2020/03/05/world-book-day-britons-reading-habits [Accessed 9 May 2022].
Posted by Zoe Van-de-Velde at 02:57 No comments:

I began by opening Photoshop going to file in the top menu and then new to create a new canvas - I went into dialog box and I picked print A5 and the resolution was 300 dpi as I would like this high quality print.  and I chose a white background.  Now I have the canvas to start with. 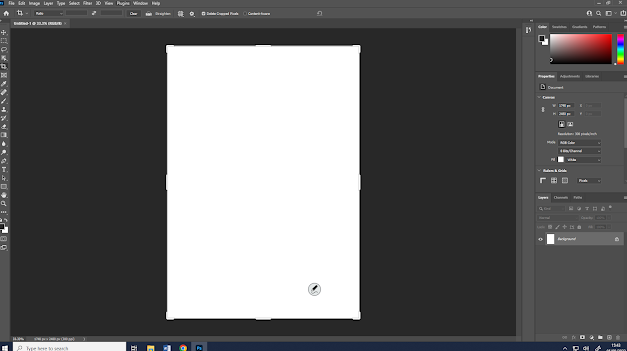 I then opened my photographic image that I obtained from Unsplash for the cover.  I checked the Image size and rsolution and changed these to match my canvas as I wanted the image to fill the page 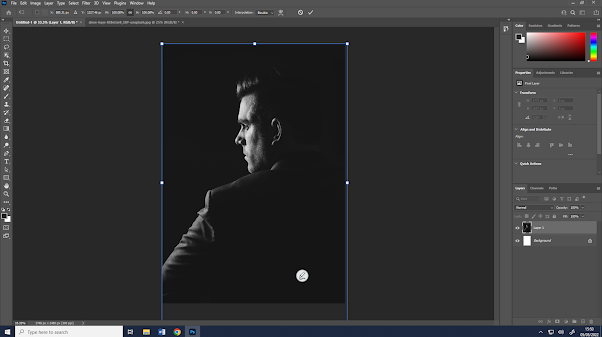 I used the text tool on the left hand menu to create my title and my authors name.  I used Felix Titling font at 36pts for the title and 24 pts for my name.  I changed the font colour and I used the move tool to change the position of the writing. 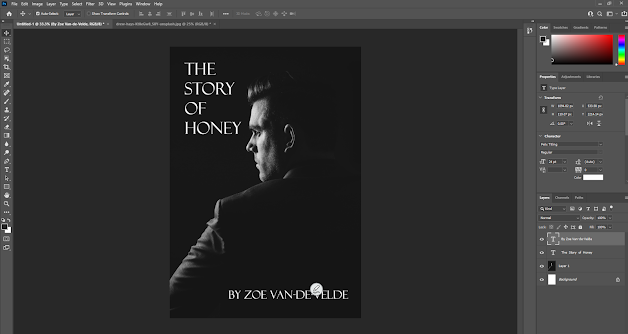 This is the final result, which I think would work on a standalone book of Hone but I am working on a joint book of Milk and Honey as well so I will be trying this again. I have saved it as a jpeg and psd. 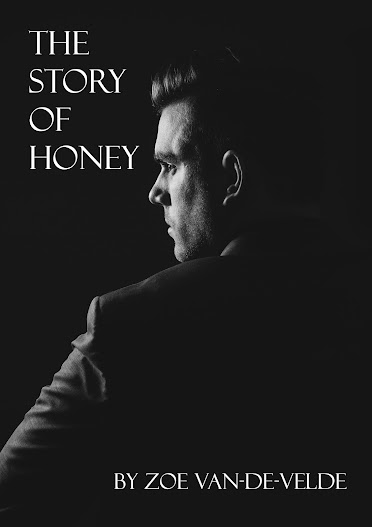 The Story of Honey: Chapter One Draft

So I have completed the first draft of chapter one of The Story of Honey.  The link is here

I think I have found some of the elements I want to incorporate.  For this, I had to research the place, Miles City in Minnesota.  I also had to think about using the American style of English in speech and considered what would be drunk at the bar.  The Bob Dylan quote I used as the song is about home and leaving home and I think this is kind of the feeling I wanted to incorporate into this chapter.