Welcome to the new term!  Another Spring Term and I am hoping that it will be exciting both academically, and practically, and that we will get the beginning of some lovely warm weather.

I would like to kick off this term with the poetry of Gérard de Nerval (1808–1855)  De Nerval was a French experimental poet who liked to take his lobster for a walk!  Whether this is true or not is highly debatable however De Nerval was quite eccentric and he stated; 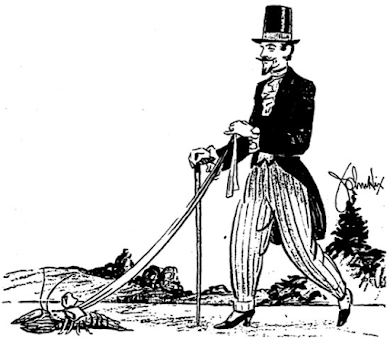 '[De Nerval] had a pet lobster named Thibault that he took on walks in the Palais Royal gardens of Paris, using a blue silk ribbon as a leash. When asked why he did this, he replied. Why should a lobster be any more ridiculous than a dog? Or a cat, or a gazelle, or a lion, or any other animal that one chooses to take for a walk? I have a liking for lobsters. They are peaceful, serious creatures. They know the secrets of the sea, they don't bark, and they don't gobble up your monadic privacy like dogs do. And Goethe had an aversion to dogs, and he wasn't mad!' (Museum of Hoaxes: 2013)

De Nerval wrote both books and poetry which 'explored the uncertain borderlines between dream and reality, irony and madness, autobiography and fiction with his groundbreaking writings.' (Waterstones n.d)

De Nerval influenced many other writers and poets including T.S. Eliot who uses a quote from De Nerval at the end of his epic poem The Wasteland.  His travelogue Voyage en Orient was widely acclaimed.  De Nerval's later work mixing poetry, prose, and journalism influenced Marcel Proust and Aurélia influenced Andre Breton and the Surrealist's work.

De Nerval achieved much in his short life, and his influence on other writers' and artists' work is impressive.  De Nerval committed suicide on the night of 26 January 1855 by hanging himself from a lantern post.  The artist Gustave Doré depicts this in his work below. De Nerval was indeed insane and spent most of his life in and out of an asylum, his doctor Emile Blanche commented; 'he hung himself because he looked madness in the face' (De Nerval 1996) 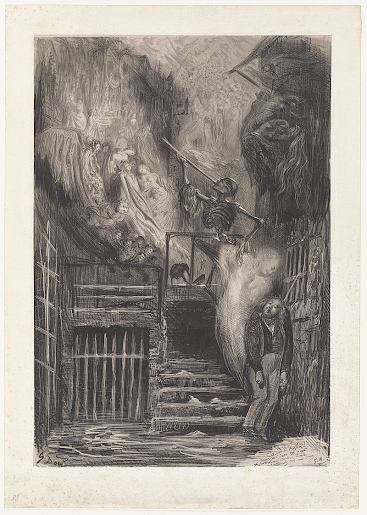 La rue de la vieille lanterne: The Suicide of Gérard de Nerval, by Gustave Doré, 1855
De Nerval belonged to a group of eccentrics known as Bousingos (rowdies) who were 'notorious for their orgies, eating ice cream out of skulls, holding literary seminars in the nude [and] for playing loud musical instruments none of them knew how to play' (De Nerval 1996).  In his pocket upon his death were the final pages of Aurelia which some consider to be his greatest work.  It is about his descent into madness, brought on by his unrequited love for an actress. In the book De Nerval talks about his dreams and visions, these are beautifully written, and reading this there is a feeling of being lifted magically, mystically, seeing something beyond the ordinary.  I will leave you with one of these to ponder.
'Stretched out on a camp bed, I thought I saw the sky unveil itself to me as to make me full of remorse for having wished, with all the strength of my spirit, to step down again on the earth I was leaving....Immense circles took shape in infinity, like the orbs formed by water when something falls in and disturbs it. Each region was peoples with radiant faces and took on colour, moved and melted in turn, and a divinity, always the same, tossed away smiling the furtive masks of its various incarnations and at last imperceptibly took refuge in the mystic splendors of the Asiatic skies.' (De Nerval 1996:10)